by R.D. Totten (an original member!)

The process of starting THE ALAMO AREA SKP CO-OP which we now refer to as THE LONE STAR CORRAL, started with four couples sitting around the warm heater in the Thousand Trails original clubhouse at Medina Lake Texas.  (This was February 1985)  One of the couples who was a member of ESCAPEES had been to one of the early Escapades and was telling us about this new club which had began with a few working people that traveled in their RVs’.  They decided to purchase some land where they could all get-to-gather, the land they purchased was in Casa Grande, AZ. which became the first CO-OP, next came THE RANCH, in Lakewood, NM. Then another one was started in Yuma, AZ.   The idea sounded so good to us that we decided to investigate the procedures to form a CO-OP.

The Headquarters of the ESCAPEE CLUB was now in Livingston, TX. In March 1985 two couples decided to take a trip to Livingston to see what the requirements were to start a CO-OP in Texas. When we arrived at Livingston we met with Joe and Kay Peterson, they outlined the procedures, which consisted of first starting a Chapter to see if there would be enough interest in a CO-OP. We came back and began to talk with other RVers and began signing up new Escapee members in a very short time we had enough interest to start a chapter which was Chapter 11 in the Escapee organization. We began having rallies and put forth the idea of starting a CO-OP. In October 1985 we began signing up prospective members and at the Chapter meetings we would also have a time set aside to discuss items pertaining to what would be required to start a CO-OP. We first set our requirement as to location. We decided it should be within a 50 mile radius of San Antonio, which had much to offer in the way of shopping and entertainment etc.. We selected a land search committee and began looking in October 1985 for suitable land. We looked through the classified sections of the newspaper and contacted several real estate offices to see what was available and the cost. We put many miles on our vehicles searching for the ideal parcel of land. Our main consideration was the availability of water, electric, road access and the type of land and the County Tax. We were about to run out of places to look, some of the places we had found were discarded because of tax structure, blowing sand, rock just under the soil, lack of enough level land etc.

Finally we met a real estate agent in Hondo (February 1986), who said a client of his was just about ready to put up some acreage for sale. He offered to take us out and show it to us. “UREKA” It was just what we were looking for, roads on two sides, electric and a new water company had just been formed, so we wouldn’t have to put in our own well. It was a fairly flat piece of property with only one tree, which would make construction much easier. 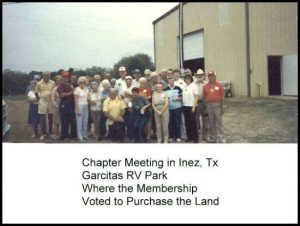 We had a Chapter/CO-OP rally scheduled for April 1986 in Inez, TX. In attendance at the meeting were Joe and Kay Peterson. We had prepared pictures and drawings of the land we had found and cost estimates and proposals’ of how we would pay for the land and building of a CO-OP. We also put forth our proposal of how our members would make payments to cover the costs. We voted on the proposed land and cost of construction. The members were pleased with the land and estimated cost and it was approved at the April 1986 meeting.

We had researched what our expected costs would be for each membership. Our estimated cost was $2500 for each membership. We set up the payments: Apr 25, July, Oct, Jan, Mar 500, the remaining 250 was to be collected when we moved in and start work on the clubhouse and fence. This way it wouldn’t place a hardship on anyone. We encouraged those that could to pay in advance, that way we could pay as we go. We knew we wouldn’t need all the money up front but would have the funds available as construction proceeded.

The County Commissioners’ of Medina County set up a meeting in the evening to meet with the founding directors of the CO-OP so we could present to them what we were planning. We pointed out that most of our members would be retired and would not place a burden on the school system, and would be an asset to the community. They were very receptive and made things much easier for us. They pointed us in the right direction to secure water, electric and helped us in many other ways. 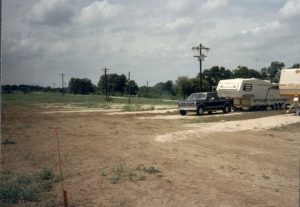 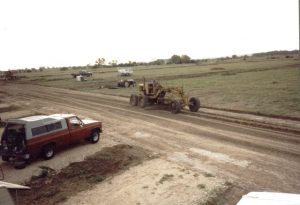 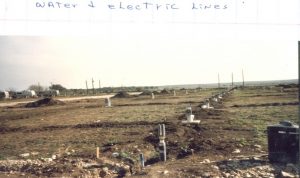 The land was purchased in July 1986 and construction began. The first thing we did was to prepare a space for those who were going to help with construction. Arrangement was made with the electric company to put in a transformer and we put up a pole and mast for our electric source for the thirteen sites we were setting up for the workers. Next we arranged with the water company to put water meters on the property and we hooked up water. We used the Case Davis machine we purchased from the Yuma CO-OP to make the sites with water and electric for the 13 work spaces and we put in a dump station for them. We then started staking out our roads and lots, and easements. We determined where the septic tanks would be placed and made arrangements to dig the holes and delivery and setting of the tanks, and laying out and preparing the leach fields. We made arrangements with the septic tank inspector to come and inspect ten (10) tanks at a time, cutting the inspection fees to a minimum. We were very fortunate to have people with expertise in the electric and plumbing fields, this saved us very much on our construction costs. 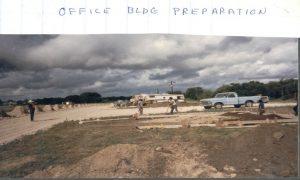 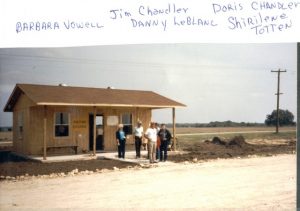 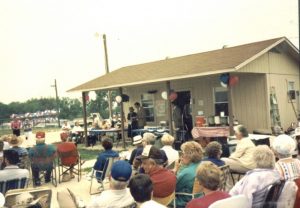 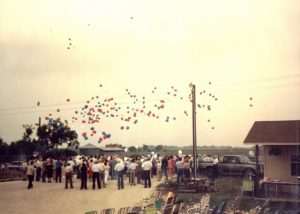 As construction progressed we built the office building where our paperwork was handled and the porch was used to help our assemblers do many jobs. We had decided to put in 130 lots and set the size of the lots to be 50’ X 70’. Our roads were to be 40 feet wide with 30 feet to be surfaced with chip and seal like the county roads with 5 feet on each side unpaved but would be covered with gravel. Our electric system would have 50 AMP, 30 AMP and 20 AMP receptacles, this way we would have electric for 30 or 50 AMP RVs’. Each lot would have a 50’ X 10’ chip and seal parking pad. During our construction we had a lot of rain which slowed construction a little, but we still completed the CO-OP ahead of schedule. We had drawings for lot selection on 25 April 1987 and had our Grand Opening on 2 May 1987. Drawings were in the order that members had signed up for the CO-OP. During the first 90 days members could exchange lots at no cost to them. After that a fee was charged. Members quickly started improving their lots with sheds, landscaping etc. Rules were set up to establish what could be done to the lot and the size of the shed and positioning, this was necessary to keep the lots looking nice and in compliance with the established rules.