Before Work on Your Lot!

Posted in Uncategorized | Comments Off on Before Work on Your Lot!

NOTICE: The debris dumpsters will NOT be returned, so please do not leave anything in boondock.

Keep your “throw aways” on your lot for the next Co-op dump run!

Posted in Uncategorized | Comments Off on Debris Dumpsters

Members and Guests are Invited.

Lunch will be served!

Submitted by Kay Markle, President, Board of Directors

Posted in Uncategorized | Comments Off on Informational Meeting 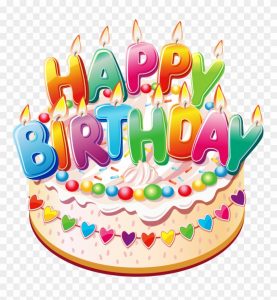 The cake and punch have been cancelled until further notice.

Posted in Uncategorized | Comments Off on LSC BIRTHDAY PARTY——CANCELLED

Place your items for pick up at the front of your lot on Friday afternoon.

Volunteers needed, meet at the maintenance area at 7:30 am. Many hands make quick work!

Posted in Uncategorized | Comments Off on DUMP RUN on Saturday, April 10th

The (almost) annual Golf Cart Race was held on the east side of the clubhouse on Saturday, March 20, 2021, on a perfect day with moderate temperatures and  slightly cloudy sky.

Contestants paired off and each team navigated a serpentine course with a blindfolded driver, and a sidekick giving spoken instructions on such matters as “turn left, turn right, slow down, back up, speed up STOP!!”  A bloodthirsty audience gathered to observe this rite of passage and cheer on the carnage.

It was looking like the hopeful fans were to be disappointed in the lack of crashes until almost the end, when Neal, under the tutelage of Richard, drove off course and devastated the entrance to a neighboring lot.  The zest of the crowd was attested to later on by member John Maxfield, two streets over, who wondered what all the cheering and laughter was all about.

Richard Headley photographed the event, while Larry Smith timed the teams and Marlene Moir kept book, er, rather, recorded the results.  Below is some incriminating evidence:

Richard extricates the cart from a neighbor’s driveway 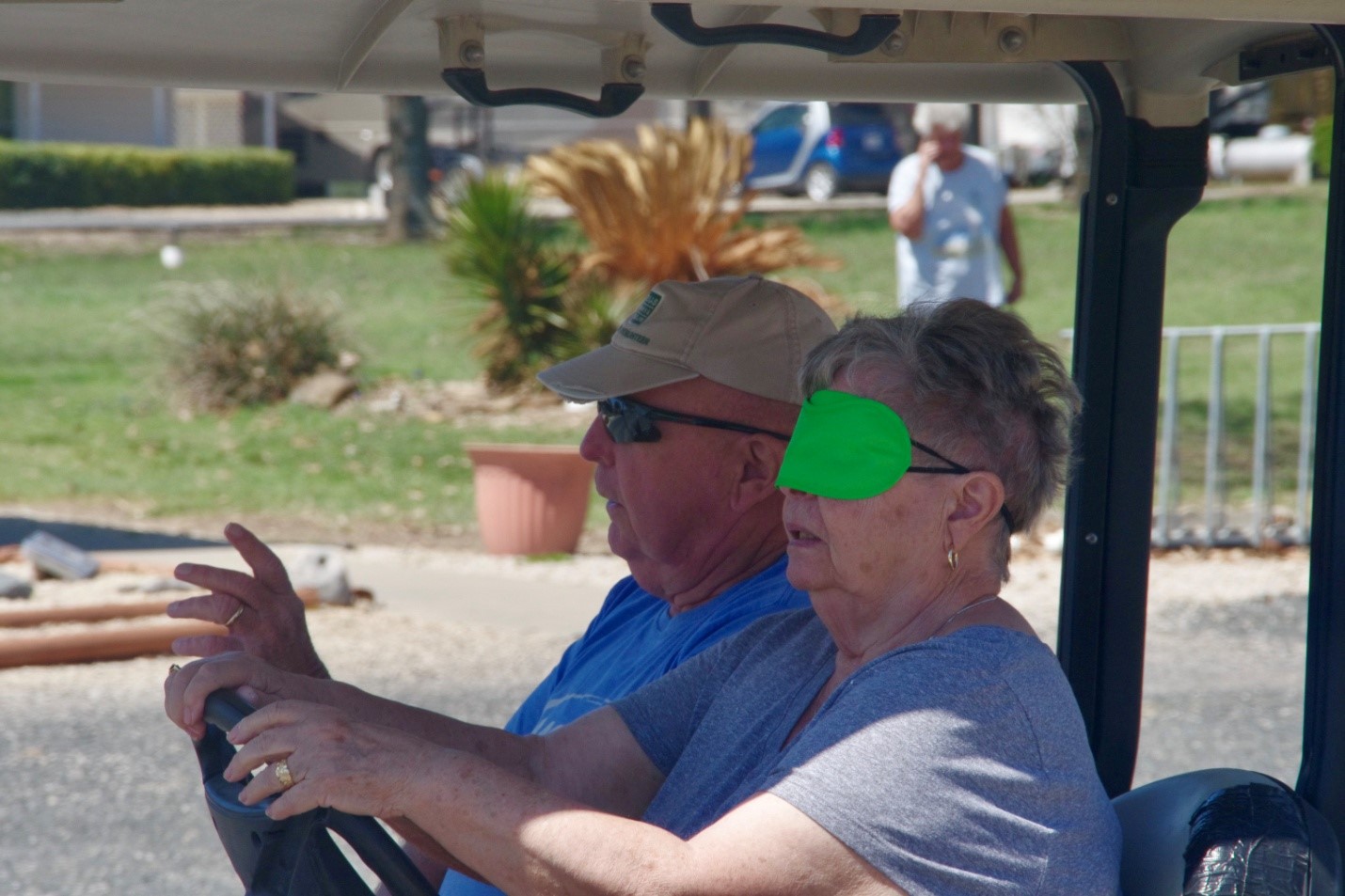 The audience is warned to keep well back of the action 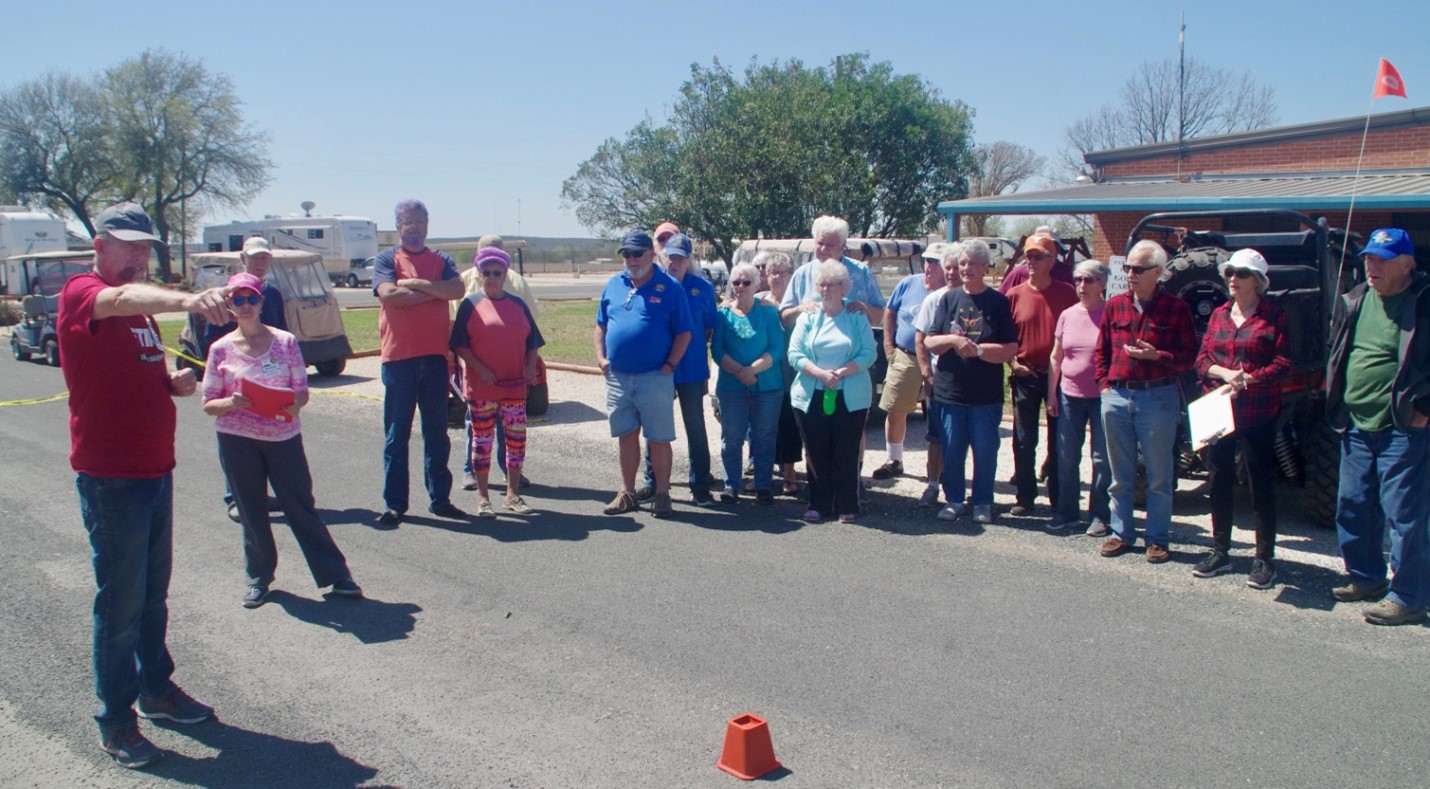 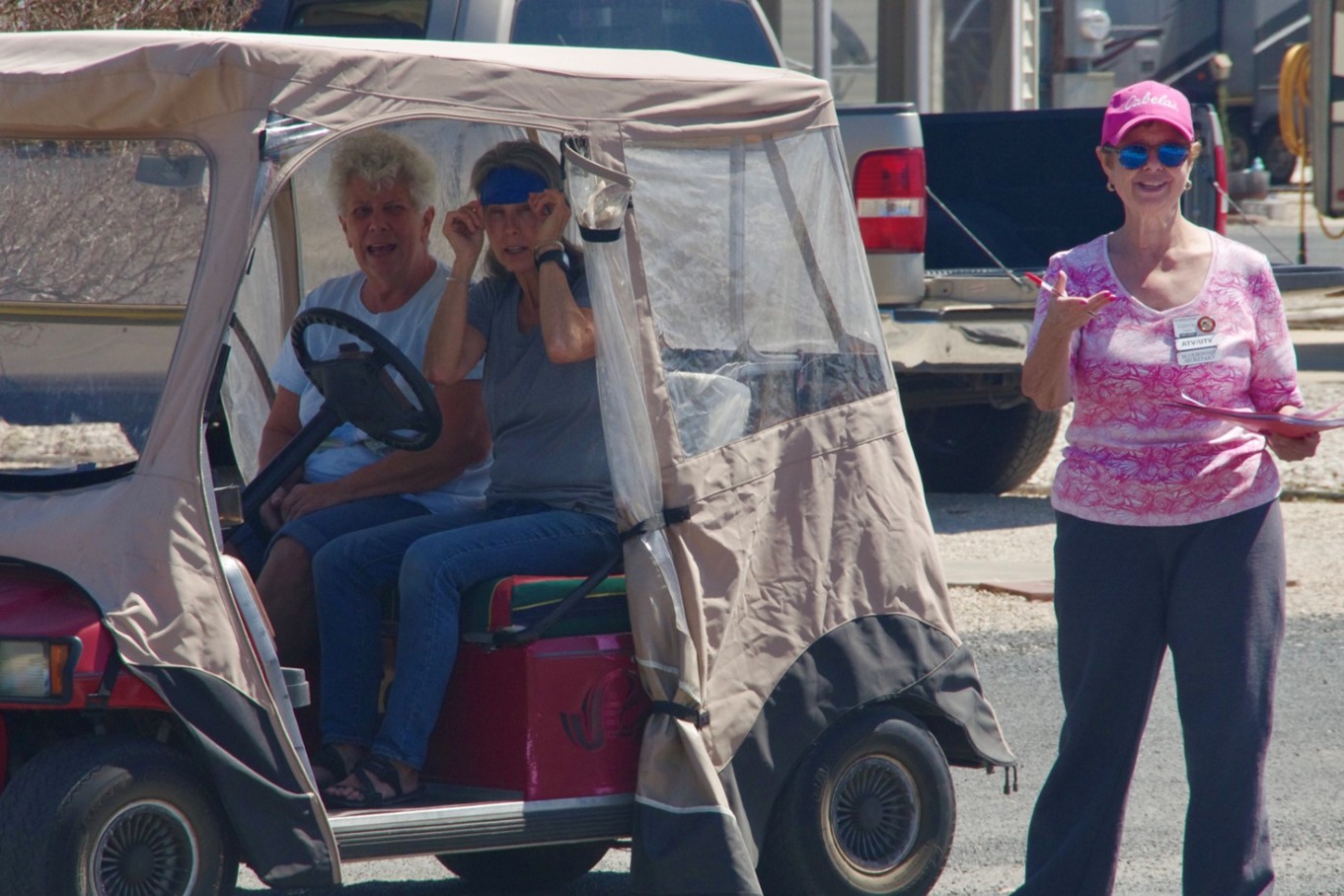 A driver learns that some golf carts have no reverse gear 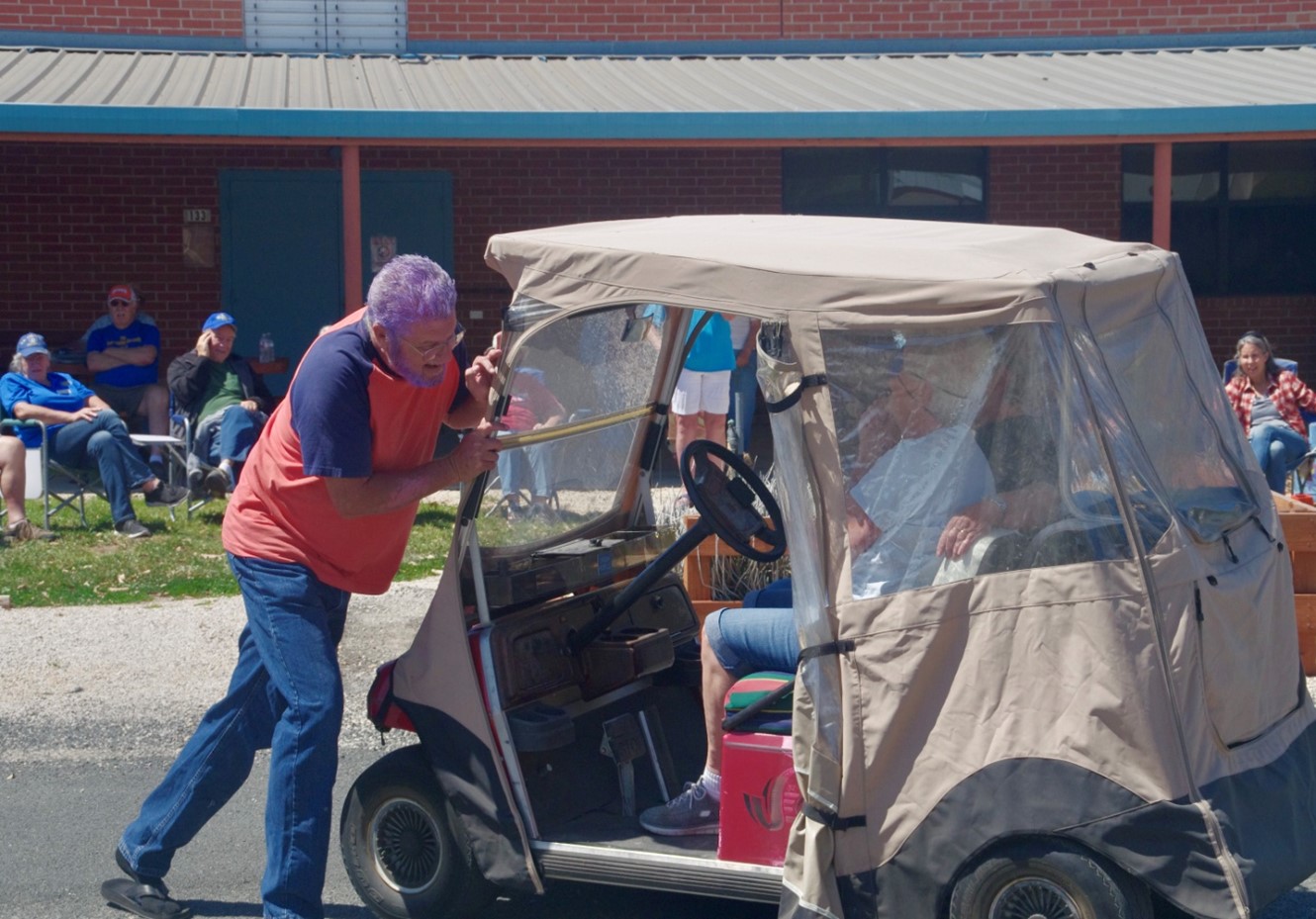 Winners of the coveted “Slower than a Turtle” award: a roll of TP 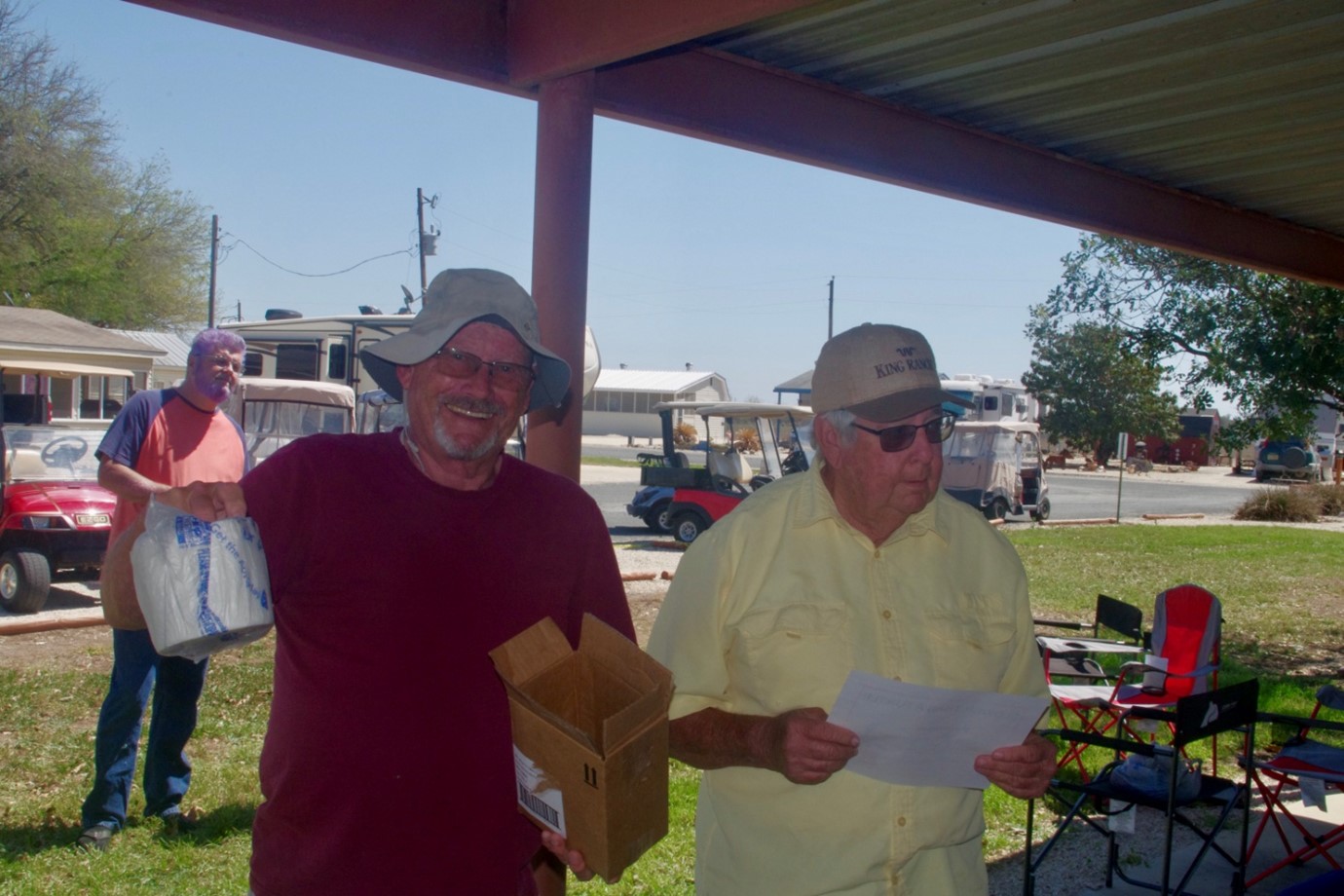 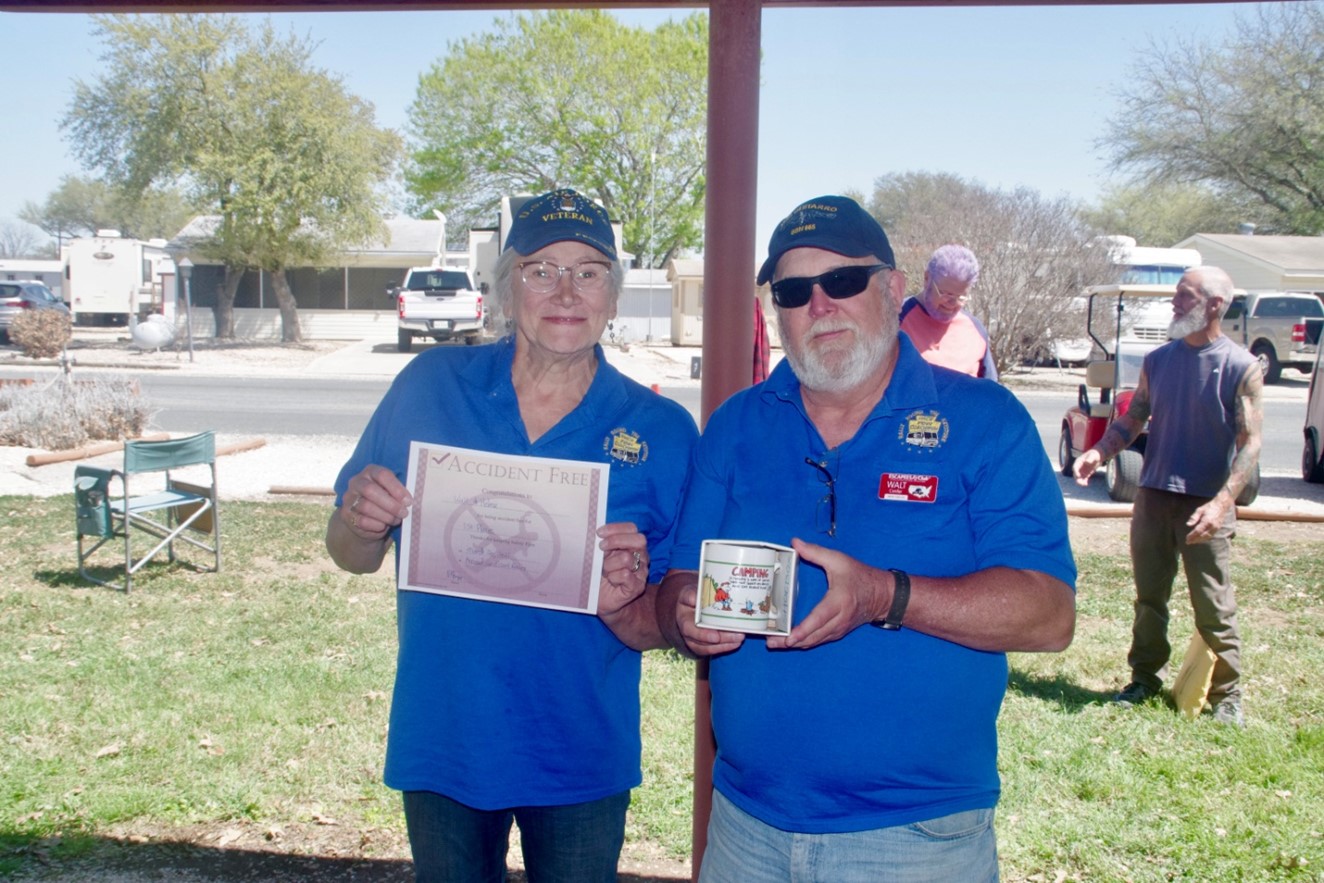 Neal and Richard receive the well-deserved “Most Entertaining” certificate 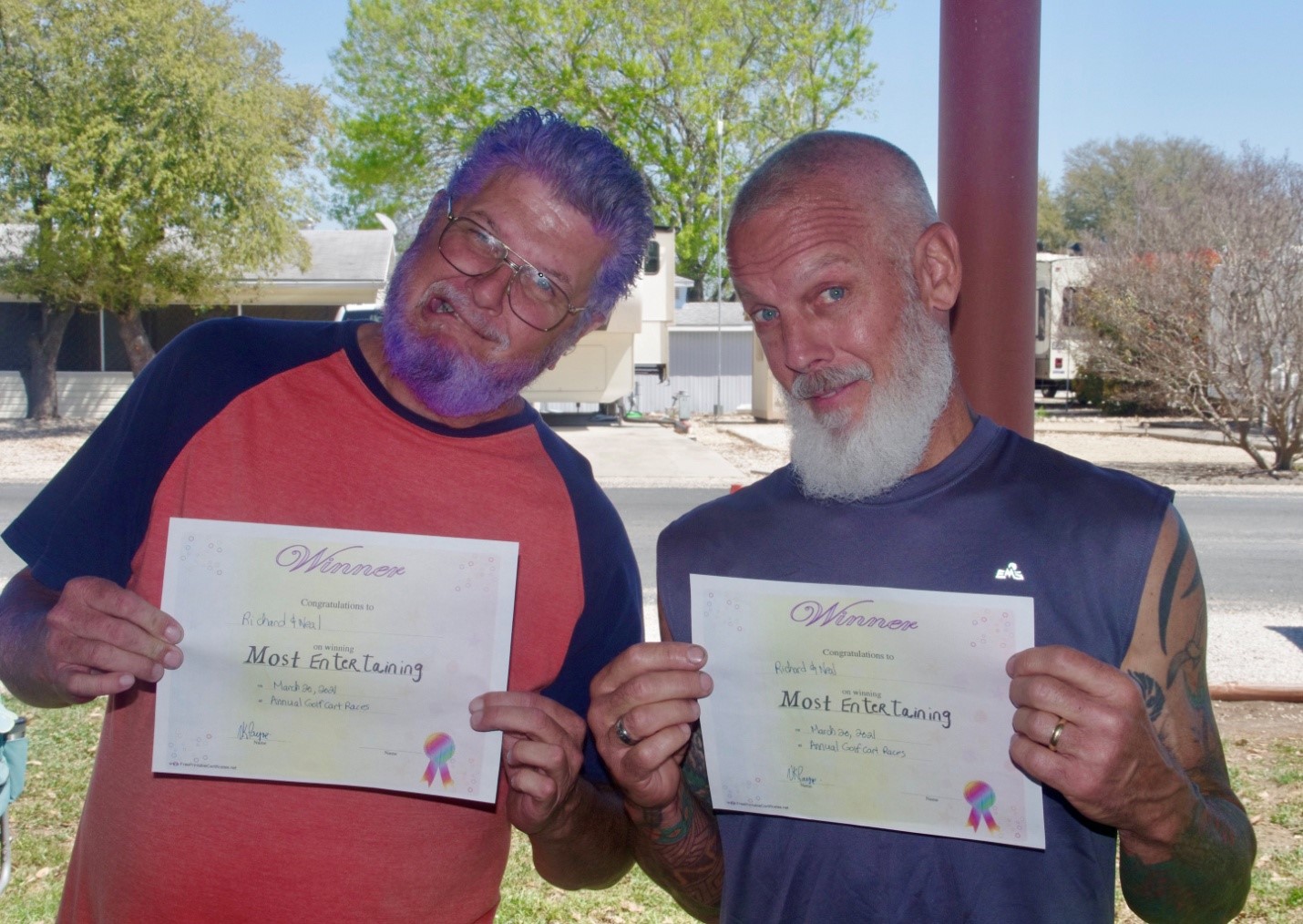 Many thanks to the folks who came to observe and participate, to the many who donated prizes, and especially to Richard Headley, Larry Smith and Marlene Mohr, and Mike Smith, who scurried around picking up toppled and crushed orange course marker cones.

Posted in Uncategorized | Comments Off on Golf Cart Races Recap

Posted in Uncategorized | Comments Off on Member Picture Board 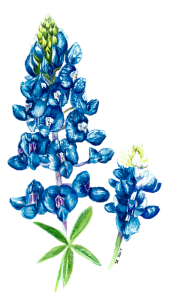 The outgoing Officers appreciate your support over the past 2 years and are confident you will support the new Officers in the coming year.

Submitted by the Outgoing Bluebonnet Officers

Posted in Uncategorized | Comments Off on New Bluebonnet Officers

It has been a hard winter, so there is lots to do. Meet at the Clubhouse porch on the eastside. We will have some tools. If you have your favorite, bring them. If we have a good turnout, we usually are done in a few hours. It is nice to have it all spruced up at once. The Adopt-A-Spots will be done by those who have adopted as the can. These are the areas we will work on:

CA16 – East side Clubhouse: Cutback and Remove frozen and dead bunny ear cactus and pencil cactus.
CA15 – Memory garden; remove dead plants, clean up stones, remove rotten barrel.     (we will replant later)
CA63 – Asian Jasmin needs cut back or scalloped.
CA30 – Row of Red Yucca near mailboxes, clean out and remove dead.
CA 28 – Herb Garden; near clubhouse dumpster. Clean out and remove dead plants. Trim back Rosemary and Mexican Oregano. (we will plant later) Trees that need trimming:
CA 27 – Near Herb garden; Trim back Ivy.
CA70 – Trim branch over Mailboxes. Adopt-A-Spot pots need paint touchup. If you would rather work on Friday, pick an item and let me know. Sherry will be available. If you have an Adopt-A-Spot, you are always on your own time. Any other help is appreciated. We like our neighborhood to look nice.

Posted in Uncategorized | Comments Off on Landscape Cleanup